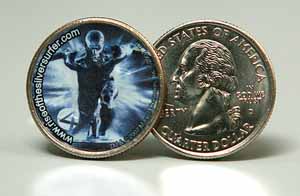 LOS ANGELES - A Marvel Comics hero is giving George Washington some company on the quarter, but the U.S. Mint doesn’t think the stunt is so super.

To promote the upcoming film “Fantastic Four: Rise of the Silver Surfer,” 20th Century Fox and The Franklin Mint altered 40,000 U.S. quarters to feature the character.

The U.S. Mint said in a news release Friday that it learned of the promotional quarter this week and advised the studio and The Franklin Mint they were breaking the law. It is illegal to turn a coin into an advertising vehicle, and violators can face a fine.

Here are a few more articles about Fox being in trouble, and another one claiming the coins are illegal.