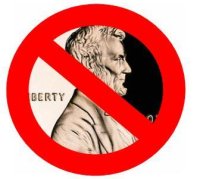 (Washington, D.C.) – Edmund C. Moy, current Director of the United States Mint, announced today that the one cent piece will no longer be produced by the mint. Citing the increasing price of zinc and copper as the main impetus for the decision, Moy explained, “We have no intention of continuing to spend more than it’s worth to mint the cent. The time has come to get rid of the cent and round consumer prices accordingly.”

“It’s about time. It’s outlived its usefulness,” says Tony Terranova, a New York City coin dealer who paid $437,000 for a 1792 penny prototype in what is believed to be the denomination’s highest auction price.

“Most people find them annoying when they get them in change,” he said. “I’ve seen people get pennies in change and actually throw them on the floor.”

The idea of a penniless society began to gain currency in 1989 with a bill in Congress to round off purchases to the nearest nickel. It was dropped, but the General Accounting Office in a 1996 report acknowledged that some people consider the penny a “nuisance coin.”

Mark Weller, Director of Americans for Common Cents, was displeased with the news. Wellers feels that “any time you have more accurate pricing, consumers benefit.”

Not so says Robert M. Whaples of Wake Forest University. He analyzed 200,000 transactions across seven states and concluded that consumers will not actually suffer. Purchases at gas stations and convenience stores are just as likely to come to $7.02 as $6.98, so the rounding up and rounding down will cancel themselves out. On average, shoppers will lose nothing.

“It’s part of their past, so it’s natural they want to keep it in their future,” said Dave Harper, editor of Numismatic News.

Wireless network Virgin Mobile USA, who launched a save-the-penny campaign, was not available for comment. One can only presume their penny truck that used to travel cross-country to gather pennies for charity will be parked for good.