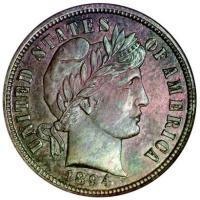 In this undated photo provided by David Lawrence Rare Coins, this pristine-condition rare dime made in 1894 at the San Francisco Mint sold Monday, March 7, 2005, for $1,322,500 at a rare coin auction in Baltimore. Only 24 dimes were made in 1894 at the San Francisco Mint, and this is the finest of the 10 known surviving specimens, according to John Feigenbaum, President of David Lawrence Rare Coins of Virginia Beach, Va., the auctioneer. The coin was consigned by collector, Bradley Hirst, of Richmond, Ind., who paid $825,000 for it six years ago, and sold to an anonymous bidder who participated in the auction by telephone. (AP Photo/David Lawrence Rare Coins)

That’s the most anyone has ever paid for a dime.