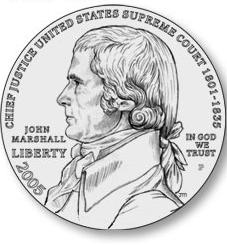 On February 4, 1801, John Marshall was sworn in as Chief Justice of the United States. He was the fourth man to serve in that capacity after the Court was created in 1789, and he served 34 years as Chief Justice. 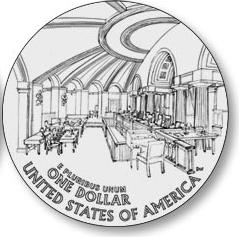 Under Marshall’s leadership, the English practice of each Justice writing his own opinion was replaced with the Court’s speaking with one majority voice, a practice that remains to the present day. Marshall wrote the Court’s opinion in 519 of the 1,106 cases decided during his tenure—almost half. He championed the primacy of the Court through his power of persuasion, congenial manner, and shrewd sense of policy.

In 1803, only two years after Marshall became Chief Justice, the Court announced its opinion in Marbury v. Madison, asserting that the judicial branch has the authority to judge the validity of an Act of Congress and to overturn the Act if it is not in conformity with the United States Constitution. This doctrine of judicial review has become a cardinal principle of U.S. constitutional law. Marshall also authored many landmark opinions establishing the supremacy of national law and the authority of the Constitution.

The Chief Justice John Marshall Silver Dollar will be available in both proof and uncirculated condition and has a maximum mintage of 400,000 coins. Surcharges from the sale of each coin are authorized to support the Supreme Court Historical Society. Public Law 108-290, signed August 6, 2004, authorizes the minting of a silver dollar to commemorate the 250th anniversary of the birth of Chief Justice John Marshall. Coins may be minted and issued between January 1, 2005, and December 31, 2005.

Coins are tentatively scheduled to be released in spring 2005.